The Faculty of Nursing, University of Indonesia (FoN UI) held a series of community service activities in the form of providing education about Clean and Healthy Lifestyle – cancer to children in children’s shelters with cancer and blood disorders. Education is delivered through the medium of playing snakes and ladders. This media was chosen because playing cannot be separated from children’s lives and can increase joy, reduce sadness and learn at the same time. This activity is aimed at increasing the knowledge and skills of children with cancer and blood disorders in shelters about maintaining hand hygiene and managing one of the most frequent side effects of chemotherapy, namely nausea and vomiting after chemotherapy.

The activity chaired by Dr. Allenidekania, S.Kp.M.Sc, together with students from the Bachelor of Nursing and Masters of Nursing Study Programs specializing in Child Nursing, FIK – UI, was carried out based on Community-based Science and Technology grants, from the Directorate of Community Service and Empowerment, University of Indonesia, in 2020. This activity followed by 25 preschool and school age children accompanied by their parents. The children who attended were people with cancer, hemophilia and cancer survivors.

The snakes and ladders brought by the team are large, 200 cm x 200 cm, like a carpet, as many as two pieces. In addition to the snake and ladder carpet, gaco and dice, the team also prepared question cards if the child went up the stairs or down if the shuffle coincided with the snake. There are two sets of question cards, the first is about maintaining hand hygiene and the second is about managing chemotherapy nausea and vomiting. Before starting the game, the children were invited to sing the song “take care of health” to the rhythm of the children’s song “Pelangi”. In addition, each child was also asked questions by students about their initial knowledge about hand washing and managing nausea and vomiting.

The game was very exciting, each team consisted of two students guiding and eight children as players. One gaco is played by two children as a team. Students act as referees and card readers. Other children who have not had their turn to play become supporters, as well as parents who accompany their children. All children are happy, and enthusiastic about playing snakes and ladders, telling each other the right answer, if the answer given by the player who is given a card is wrong. Learning through the game of snakes and ladders is effective enough to provide new knowledge and strengthen what children already know. After the children played, the mother also played and felt the excitement of the snake and ladder game. The sustainability of PHBS cancer at the shelter can be continued by giving two sets of snakes and ladders to the Amaryllis Kirana Shelter Foundation to be used as a medium for playing while learning.

The game event was closed with the distribution of prizes for all children and a group photo, and on this occasion also the Board of the Amaryllis Kirana Foundation conveyed reinforcement to parents accompanying children, question cards could be expanded with health messages and advice for children. The administrator undertakes to continue playing snakes and ladders, which can be used by parents if parents have difficulty giving advice to their children, namely by making question cards that will be played together with snakes and ladders 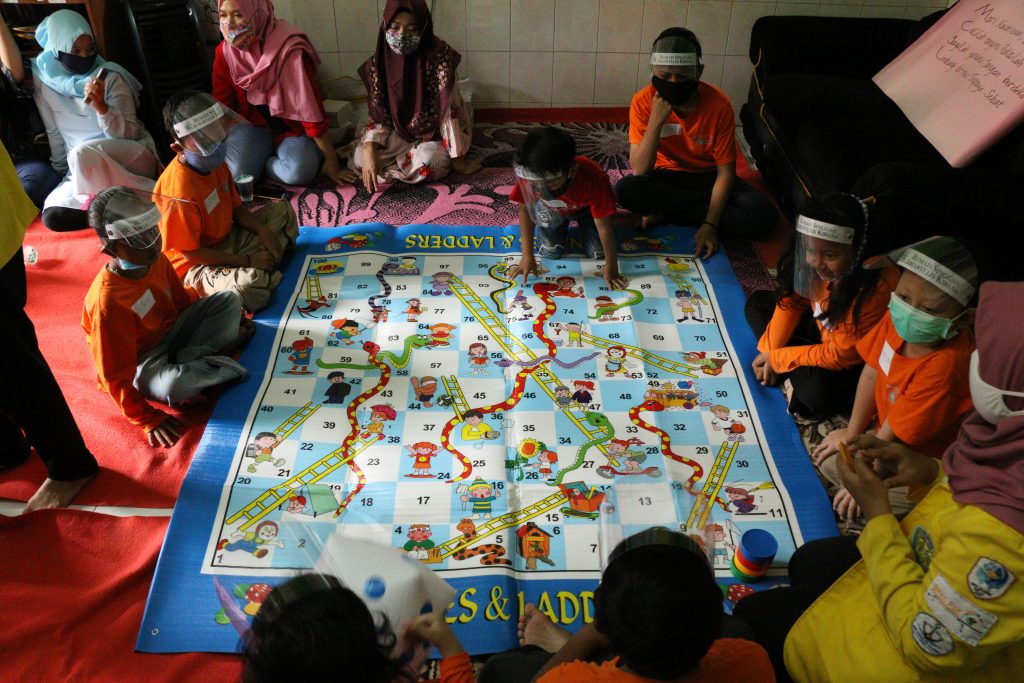