On December 4, 2020, the Community Service Team of the Faculty of Nursing, University of Indonesia (FoN UI) carried out a community service program to increase the capacity of posyandu cadres through training on monitoring the nutritional status of children under five as an effort to intervene in specific nutrition in toddlers and prevent and treat stunting in Aikmel District, Lombok Regency. East, West Nusa Tenggara. This community service program is motivated by the high prevalence of stunting in Indonesia. The 2018 Basic Health Research data shows that the prevalence of stunting decreased from 37.2% to 30.8%, and the prevalence of wasting from 12.1% decreased to 10.2%. The number is indeed decreasing, but the figure is still above the threshold set by the World Health Organization (WHO). WHO has set a stunting limit of 20 percent (World Health Organization, 2017).

According to the Head of the Community Service Team of FoN UI, Dr. Nani Nurhaeni, S.Kp., MN said that the determination of Aikmel District as the intervention location was because Aikmel District was one of 5 stunting loci areas in East Lombok Regency. In addition, children under five (0-5 years) are the age group that most often suffers from nutritional problems. Therefore, a balanced nutritional intake is a very important part of the growth and development of toddlers. The acting head of Aikmel Village, Burhanuddin Jafar, S.AP also said that one of the main programs promoted at each posyandu and cadre was the measurement of nutritional status and monitoring of nutrition in toddlers because considering that Aikmel District is one of the loci of stunting in East Lombok, this This is said to be right on target to be carried out in the Aikmel sub-district.

The same thing was also conveyed by a member of the Community Service Team, Ns. La Ode Abdul Rahman, S.Kep., MBA said that a posyandu cadre has a vital role in educating the community in matters relating to improving health status and spearheading the success of monitoring infant nutrition. a posyandu cadre must have knowledge and skills that support them in carrying out their duties as cadres. Therefore, increasing the knowledge and skills of cadres is absolutely necessary.

The training participants were 31 posyandu cadres from 7 Posyandu in the Aikmel District. The nutrition monitoring training materials delivered included the basic concepts of posyandu, measuring nutritional status, filling out the Towards Health Card (KMS), counseling for posyandu cadres and feeding infants and children. Ayuni Rizka Utami, S.Kep.,Ns as a community service member who delivered the training materials said that the material was not only delivered through lectures but there was a role play in filling out the KMS by giving cases as a trigger factor. In addition, the practice of measuring weight, body length, and head circumference uses equipment provided by the service team such as digital scales, height meters, and head circumference meters.

Furthermore, during the COVID-19 Pandemic, the implementation of nutritional status monitoring training strictly implemented the Health Protocols recommended by the government, such as before entering the training room participants were checked for body temperature, washing hands, requiring masks to take place during the training and maintaining seat distance. This is done in support of government programs related to preventing and controlling the spread of COVID-19. 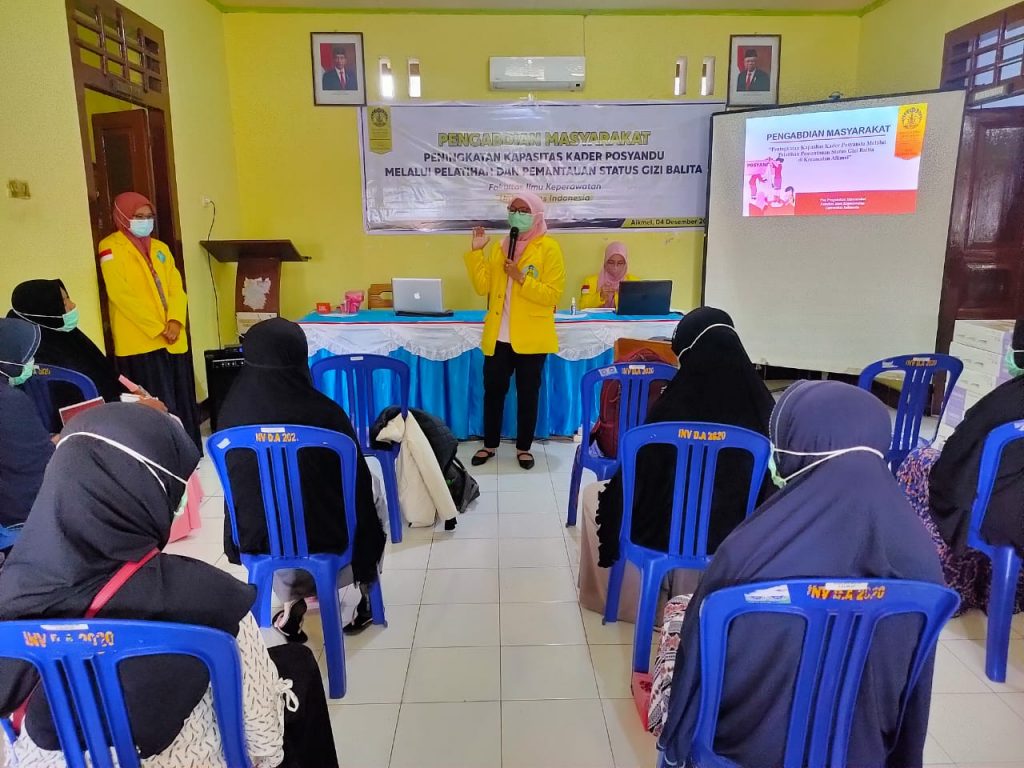 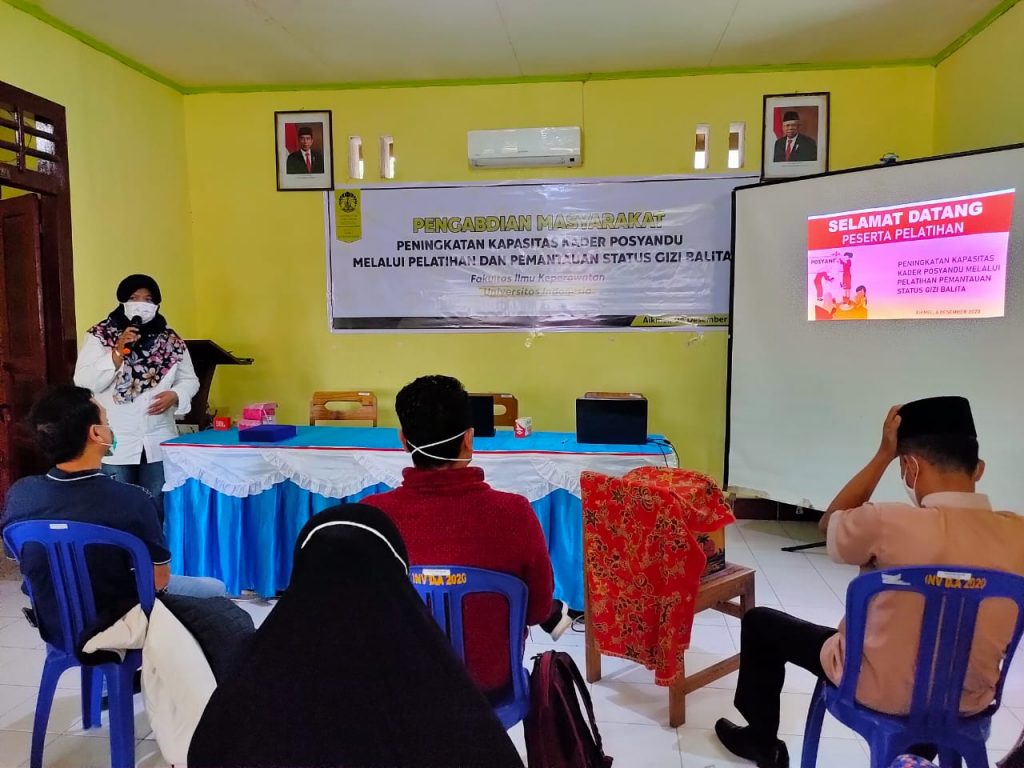 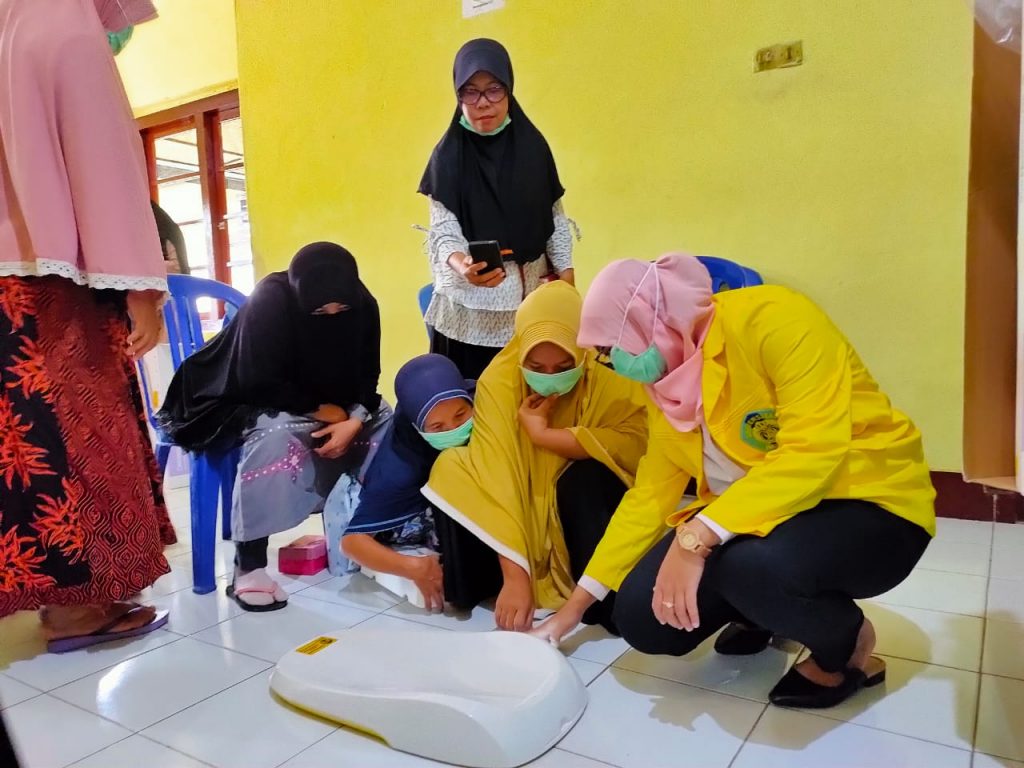 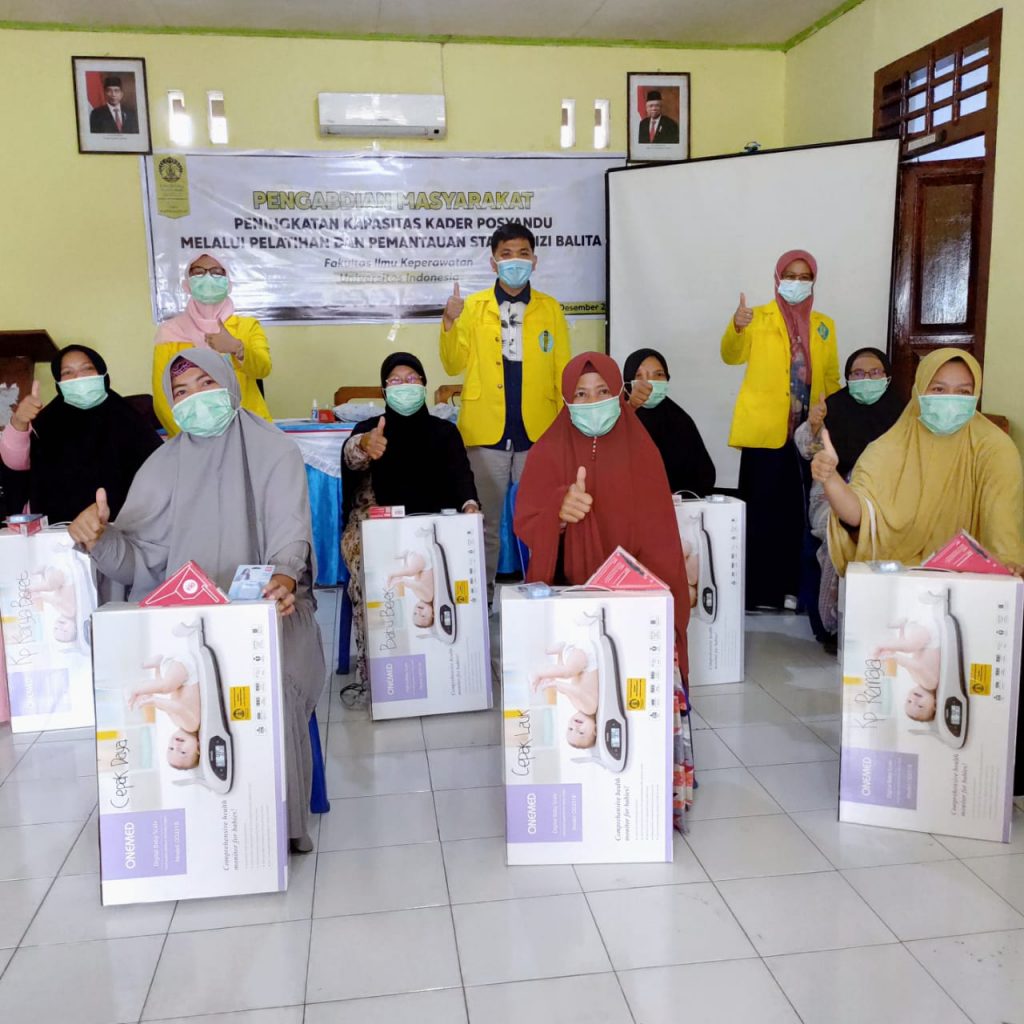