Several lecturers at the Faculty of Nursing University of Indonesia (FoN UI) have introduced a civic mission program called Empowerment of Same-Age Friends (Persebaya) to prevent suicides among teenagers.

“The phenomenon of suicides is quite rampant among youngsters. This is the reason behind launching this program,” Prof Dr Budi Anna Keliat, head of the FoN UI Civic Mission, stated at the UI campus here on Monday. 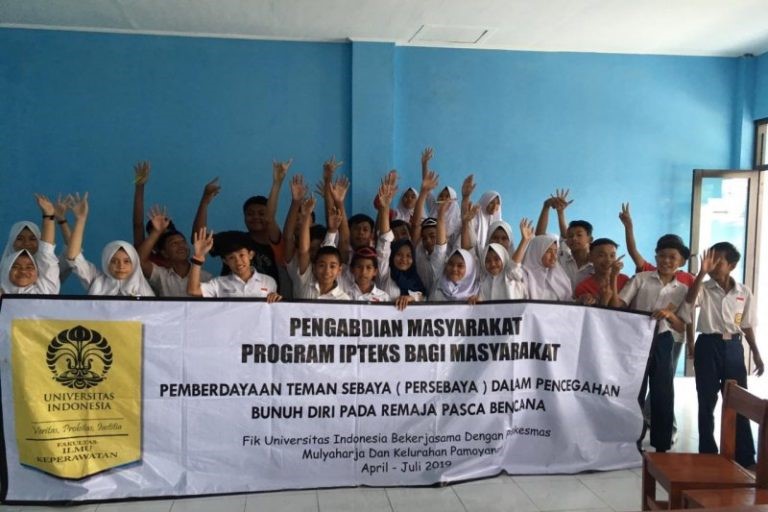 The Persebaya program promotes intervention by stimulating the psychological growth of youngsters, to then be followed by building peer leadership, she explained.
The program is supervised by mental nursing experts, such as Prof. Dr. Budi Anna Keliat, Ice Yulia Wardani, and Giur Hargiana, with the involvement of students taking the mental nursing program of 2018.

The program was first introduced at three junior high schools located in Pamoyanan Village in Bogor, West Java, with the cooperation of the Mulyaharja community health center (Puskesmas), from April to June 2019. It involved teachers and was evaluated by the civic mission teams of FoN UI and Mulyaharja community health center. The youth’s confidence is boosted to prevent them from ending their lives, which is an indication of early psychosis (prodromal). Pamoyanan Village Chief Dodjo Widyarahardjo lauded the implementation of the program in his village and is optimistic of it being implemented on a continual basis.

“This program is expected to be implemented in a continuous and consistent manner, so teenagers gain new knowledge in understanding themselves and their environment. Their same-age friends could help them deal with their problems. Indirectly, this could prevent suicides among teenagers,” Widyarahrdjo emphasized.